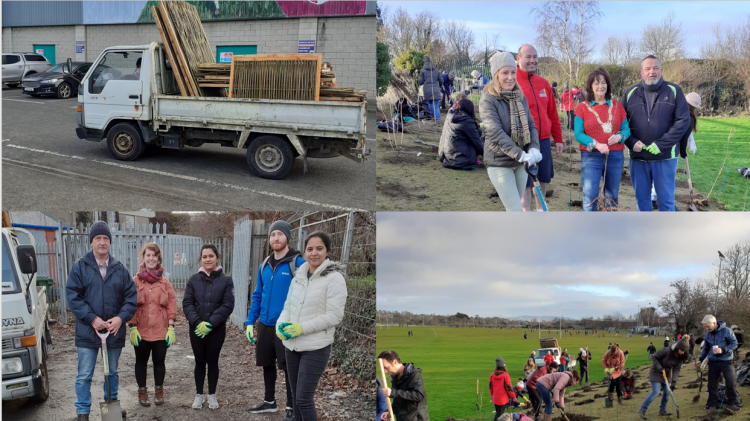 On Saturday January 22nd we planted the 1st pocket forest in the district in Naomh Olafs GAA Club. We were delighted to be joined by An Cathaoirleach Cllr Lettie McCarthy and Minister Josepha Madigan T.D. and we were completely blown away by the number of volunteers who showed up early on a Saturday morning to help plant over 480 trees.

The pocket forest, a joint venture between Sandyford BID and Dún Laoghaire-Rathdown County Council, is just one of the initiatives in our Project Green Campaign: Greening the Grey, which looks at implementing ways to transform Sandyford Business District’s environment into a more liveable, healthy space and plan for a smart sustainable future.

Speaking about the initiative, SBD Commercial Manager, Ger Corbett said “What was a few months in the making will hopefully be enjoyed by generations to come. It is great to have the first element of Project Green in the ground. We promised that our Innovation Week event on sustainability would be a springboard for action in Sandyford Business District and it was heart-warming to see all the volunteers on Saturday morning. Our thanks again to all of those who turned up, Dún Laoghaire-Rathdown County Council for their support, An Cathaoirleach, Cllr Lettie McCarthy and Minister Josepha Madigan T.D. for getting involved and also Naomh Olaf GAA for the plot of land”

Keep an eye out for more of our Project Green initiatives coming soon.